Termites, often known as white ants are wood eating insects. Termites are highly variable in size, color and shape, but have many similarities. All Termites belong to the order Isoptera.

Termites are social insects and live in colonies. Some termites live in mounds above ground (e.g. Magnetic termites), some live in nests up telephone poles (e.g. Nasutitermes species), some in the base of trees and stumps( eg.Coptotermes species), and some even live in the very timber walls of the home.

Termites live in groups or colonies up to several million in number. In any colony there are several different forms called castes. Worker castes are for food supply and tunneling. Soldier castes for defense of the colony and Reproductive caste for future generations and colony survival. Reproductive termites are often referred to as alates. The worker and soldier castes are sterile. All termites consume cellulose (found in timber, paper, cardboard, grass etc) as their food source.

Termites are often associated with mounds, but also form subterranean nests underground in root systems of trees or timber stumps. Termites nest in soil fill and building material under concrete slabs in patios, veranda's and paths around the premises. Termites can nest in the trunk of a tree just above soil level or sometimes higher up in the fork of a branch where moisture has entered the tree causing decay. Termites can tunnel 50 to 80m from their nest to a feed site, for example from a tree 3 house blocks away to a piece of skirting in a building.

Coptotermes termite workers are 5mm to 8mm long with the soldiers slightly larger having a darker head and pincers or biting jaws called mandibles on their head. These mandibles are used for protection of the termite colony.

Termites fly in the warmer summer months, normally when the humidity is high in the evening when the flying caste members, known as alates (6.) take to the wing in a Nuptial flight. They swarm into the air from infested timber in the building or from an infested tree. The alates pair up after a short mating (7.) display and tunnel into the soil to start a new colony. This process of release and pairing up is very hazardous with a high mortality rate from natural predators and exposure to the elements.

The alates are sexually mature males and females whereas the other termite castes are sterile. There is normally one Queen termite per nest and she can measure up to 4cm in length and live for 40 years. The Queen is very productive in her lifetime and can produce as many as 40,000 eggs (2.) per day. The King and Queen (1.) are entombed in the egg laying chamber in the center of the colony and co-ordinate the daily activities of the worker (4.) and soldier (5.) termites. 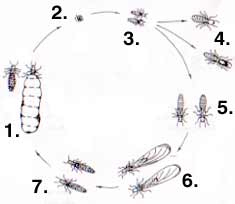 Termite colonies only flight when the colony is mature, anything up to 5 years after the original nuptial flight.

Conditions that can make your house vulnerable to termite attack.

How Harmful Are Termites?

Subterranean termites most commonly live in the soil where they can avoid temperature extremes and obtain the moisture essential to their existence. Rather than building a discreet nest like their tropical cousins, subterranean termites construct numerous scattered nursery areas where reproductives are found together with piles of eggs and young termites. These nursery areas can be in buried stumps, logs, dead roots or pieces of lumber left in the backfill after building construction. Nursery areas can also be found in the wood of structures. These areas can be as far down as 3 to 6 m below ground level. Because subterranean termites can get moisture from the soil, they can attack any dry wood or other source of cellulose within foraging distance of the colony. Besides wood structures, subterranean termites will attack untreated fence posts and attached boards, utility poles, and any other food sources such as cardboard, paper, fiberboard in, on, or close to the ground. They prefer to feed on the softer spring growth of infested wood, leaving the harder summer wood and a paper-thin outer shell of wood. Termite nursery areas located under sub-floors or concrete slabs near furnaces, water heaters or other sources of heat can remain active during the winter.

Termites are social insects which means they rely upon each individual in the colony for survival. Termites need cellulose (typically wood) moisture and warmth to survive. A colony consists of a Queen, King, Soldiers, Workers and Reproductives. Typical colonies contain around 250,000 workers although studies have found colonies with over 1 million workers. New colonies are formed when winged reproductive females and males emerge from a mature colony (four to five years old) and take flight. These termites are commonly called swarmers. After a short flight the swarmer returns to the ground, drops it's wings and searches for a mate, preferably from a different parent colony. When mates are found the termites dig a chamber and close the opening. After mating the queen lays typically lays less than fifty eggs the first season. The new workers that hatch enlarge the chambers and collect cellulose for food. The queen's only job from that point forward is to lay eggs that hatch after incubation of 50-60 days. She may live up to 25 years.

Worker termites are the most common caste found when examining a colony. Workers probe blindly through the soil looking for cellulose materials. In nature, termites help maintain our forests but when probing termites find your home their benefits seem less worthwhile. Termite workers eat cellulose material and exchange the food and nutrients by mouth (called trophallaxis) with colony members including the King and Queen. Termite workers also groom each other resulting in the transfer of soil, wood particles, fungal spores, and chemical pheromones that maintain the social organization within the colony. Subterranean termites nest underground because they need protection from light and dry air. When workers need to cross substrates such as a concrete slab they will construct mud tubes from the soil. Workers can build as much as 1" of tube in an hour using soil particles and salivary secretions. Termites will repair broken tubes quickly if the tube is being used. Mud tubes are a good indication of a termite problem. Destroying the tubes will not eliminate the infestation.

What Do Termites Attack

Termites feed on products containing cellulose. Termite jaws are hard allowing them to shear off micro particles of wood one piece at a time. While termites are very beneficial to our environment, they are serious problem for structures. Estimates vary but it is clear that termites cause millions of dollars in damage to structures every year.

A colony consisting of 250,000 workers can consume approximately 1 cubic food of wood or up to 20 linear feet of a 2x4 piece of wood in one year under certain conditions. Termites typically will not leave a home once they have infested it.

Termite reproductives form new colonies through "swarming". The swarming termites develop during winter months. Usually in the spring during warm and humid weather, worker termites will build special tubes called "swarming castles" and prod the swarmers out for mating. Swarming typically last for around 30 minutes. Although these reproductive termites are a nuisance, they are actually doing homeowners a favor. In many cases, swarming termites are the first signs that a home is infested with termites. Because termites can destroy wood completely out of our sight year round, these winged termites are an important signal. Swarmers do not cause any damage. Their purpose is to start new colonies. Indoor swarmers will die within a few hours therefore we do not recommend the use of pesticides. You should wait until they die, then you can sweep or vacuum them up. Very seldom are indoor swarmers successful in starting a new colony (termites must find sufficient moisture inside the structure).

Sometimes termites swarm inside your home just briefly, die and then you do not see them again. Some people make the mistake of thinking the termites went away or maybe the pesticide they sprayed where the swarmers were emerging solved the problem. Sorry to say it is not that easy. Swarmers only emerge briefly during the right environmental (temperature, light and moisture) conditions. You may not see them again until the next year. However, the worker termites in the colony will still be feeding on your home if they are present like the swarmers suggest.

Each year exterminators receive hundreds of calls in the spring and fall from people who are concerned they have termites swarming. In some cases the winged culprit is a swarming ant. The differences between a winged ant and a swarming termite are shown below. 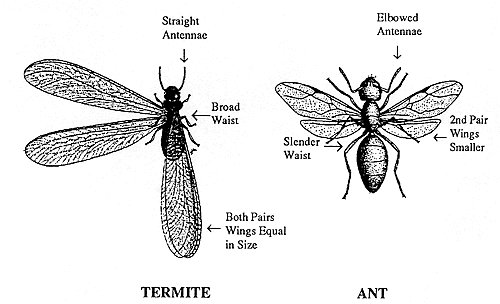 The bodies of termite swarmers are black while ant swarmers may be brown, black or red. Termite swarmers are typically much smaller than ant swarmers and have a much shorter life span out of the soil. In addition, termite swarmers have straight antennae, no constriction at the waist and both pairs of wings are equal in size. Swarmers do not destroy wood and cause no problems outside the home. Inside, swarmers are certainly a nuisance but more importantly, they are alerting you to a potential termite problem.